In 2010 and 2011, a series of earthquakes struck Christchurch New Zealand's south island.  The February 2011, magnitude 6.3 quake, destroyed vast areas of Christchurch and took over 180 lives. Approximately 80% of the CBD and its infrastructure was demolished, 100,000 houses were damaged and 10,000 homes were designated for demolition. An area more than four times the size of London’s Hyde Park was deemed uninhabitable. The Christchurch rebuild requires tens of thousands of workers, is estimated to cost over $40 billion NZ and will take over 15 years to complete.  As a result, Christchurch is in the midst of an unprecedented opportunity to reconstruct an international city, to combine rich natural and cultural heritage, a deep economic base and best-practice 21st century urban design. To see an overview of the project visit: http://progressmap.ccdu.govt.nz/.

As one of New Zealand’s oldest cities and the South Island’s largest, Christchurch is known as “the Garden City”, and it is currently home to around 377,000 people from a variety of different cultures. “Many locals cannot remember what the central city used to look like. Gravel quadrants have replaced multi-storey buildings, creating lines of sight through the city that never existed before. Many of the buildings that still stand are boarded up, with steel fencing around them as they wait to be sold or demolished. The main strip of bars and restaurants that lined the river, and was the site of the city's main entertainment hub, is now an empty lot.

Until recently, you could look through the dusty windows of a closed down cafe and still see an untouched 22 February 2011 edition of the local newspaper. And while creative novelties such as a retail mall made entirely out of steel shipping containers draw increasing numbers of visitors, the city's other main attraction is the battered and broken cathedral in the middle of the main square – a monument to what was endured… 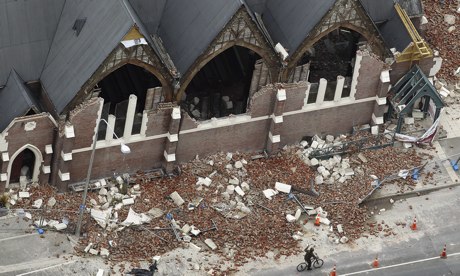 The government's response was to establish a single body, the Canterbury Earthquake Recovery Authority (Cera).  It was solely responsible for managing the rebuild… A division of Cera was tasked with developing the city's first urban blueprint plan. Taking in 106,000 ideas from across the community, it was launched in July 2012 after a 100-day deadline. "We want this city to be distinctive with an active urban edge," said the division's general manager, Don Miskell. A team of local and international architects and designers created the plan, which involved 70 projects being constructed over the next 20 years. It imagined a compact central business district dominated by low-rise buildings. A "green frame" around the CBD would blend in with the Avon river that was being developed as a corridor of parkland through the city. It also emphasised environmentally sensitive transport, including a new light rail network, pedestrian boardwalks and cycle lanes…

There is still debate about what Christchurch should become… In the meantime, tourists with high-powered digital cameras stop and stare at machinery continuously tearing down buildings. More recently, though, another trend has emerged: tourists are also watching with curiosity as more and more buildings slowly go up.”[1]

To learn about opportunities in NZ, go to the Government Electronic Tenders. GETS is a free service.   https://ccdu.govt.nz/tenders