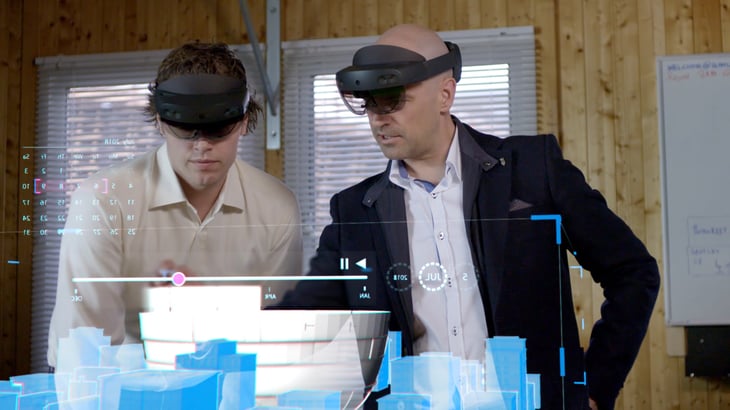 We believe that mixed reality will have a significant impact on how construction projects are delivered. So we're excited about our improved SYNCHRO XR app this summer, and the hotly anticipated HoloLens 2. We spoke with Greg Demchak, SYNCHRO Technical Architect and lead on SYNCHRO XR to ask him a few questions about the story so far, and what he believes is the value mixed reality can offer.

Greg is passionate about prototyping, innovation, and human-computer interaction in the realm of digital tools for architecture and construction. He has more than 18 years of experience designing software for the AEC industry and holds degrees in architecture from MIT and the University of Oregon. He is driving the development of cloud and mixed reality solutions for SYNCHRO.

What is SYNCHRO XR and where did the idea come from?

SYNCHRO XR emerged from a series of custom-driven innovation prototypes developed using “hackathons.” A hackathon is a coding session where you try to create working prototypes of ideas over the course of a weekend or a week. Short sprints. This style of working is rooted in agile development methodologies where incremental improvements, released quickly, pave the way for continuous learning. When we develop for new technology on mobile or the HoloLens, we build quick functional prototypes that solve specific problems a customer is facing. In solving these problems, we uncover new problems, and this leads to a continuous innovation cycle. The app you see today is the result of dozens of small prototypes.

How does SYNCHRO XR work?

SYNCHRO XR works by making a connection to a construction digital twin database running in the cloud. At the core of that database is SYNCHRO data, which includes Tasks, Resources, 3D meshes, User Fields, Documents, Issues, Users, Companies, and Status. From this database the app can generate 4D models and the ability to move back and forth through the construction timeline. This allows construction teams to visualize their planned approach to the job using the holographic computing power of the HoloLens—the most advanced mixed reality device in the market. Once the data is loaded to HoloLens, users can align digital assets and information with the physical world and even make updates to the data and synchronize those changes back to the server.

If you are not familiar with the HoloLens, and how it relates to virtual reality displays using head-mounted devices, it is considered a form of augmented reality. With HoloLens, you can see your surroundings and the holograms appear to be part of your physical space. This is different for VR, where the user is fully immersed in a virtual world—detached from physical reality.

What is the main objective of the app?

The objective of SYNCHRO XR is to radically improve the accessibility and usability of digital twin data. The app is a live connection to a construction planning database, which opens the door for totally new human-machine interfaces. Put simply: the objective is to uncover new ways of working and designing with data. It explains what it means to have digital data become part of our physical space—not as screens that we look at, but as 3D objects in space and time.

How can SYNCHRO XR improve work in the construction industry?

Our customers are looking for ways to improve safety and productivity on the jobsite. The HoloLens provides the most natural interface for understanding 4D construction information. Not only does the construction sequencing become free from the constraints of a 2D screen, the hologram can also be aligned with physical reality. This provides a quick and easy way to evaluate the situation being planned against the actual constraints of a jobsite. Our clients see this new way of evaluating their construction approach as a way to identify safety concerns as well as improve planning and project management by embracing the idea of radical transparency.

Once you introduce reality meshes to the equation, this opens up other possibilities. For example, a reality scan of as-built conditions could be loaded into the HoloLens, thereby providing X-ray vision. Users can see through walls and ceilings to see what was actually built by superimposing the scan-data with the physical space. From a maintenance and renovation perspective, this would be truly game changing.

What are the advantages of SYNCHRO XR?

The key advantages of SYNCHRO XR include interaction patterns that make working with digital twins incredibly intuitive. With the app, users can scale, zoom, and rotate models with easy to learn hand gestures. They can reach out and grab objects with their hands as if the object were right in front of them. With the shared experience mode, users can even pass holographic 3D objects back and forth between each other. Users in remote locations can also participate in the shared experience. This fundamentally changes how users collaborate with digital models.

Will you make any improvements to the application or add functions in the near future?

We anticipate continued development of applications and experiences that leverage the power of mixed reality. With the launch of HoloLens 2, we are at the beginning of a new journey and will continue to innovate in this space. One of the areas we are actively exploring is how to leverage Azure Remote Rendering for streaming large poly models from the cloud to the device. This is how we imagine interactions with large digital models becoming mainstream. By streaming graphics from a server, rather than computing all the geometry on local hardware, it democratizes the access and opens things up for totally new user experiences.

We firmly believe that the future of digital construction is rooted in the concept of an intelligent cloud connected to edge devices working together in real time to deliver context-sensitive data to the right time, space, and person.