Vannevar Technology Inc, a spinoff of Google X has taken over responsibility for a confidential construction technology product that was prototyped at Google X- the secret arm of Google tasked with creating revolutionary new technologies.  It was Google X that developed Google Glass and driverless cars.  According to last week’s article in Globes, http://www.globes.co.il/serveen/globes/docview.asp?did=1000886261, the new technology, dubbed  Genie, is “a platform with online-based project  planning applications to help architects and engineers in the design process, especially for skyscrapers and large buildings.”  Google estimates the platform could generate $120 billion for Google annually- yes, that is billions.  The article says that a Google report stated that Genie had the potential to “save 30-50% in prevailing construction costs and shorten the time from the start of planning to market by 30-60%.” When viewed from this perspective, 4D/5D BIM seems like a small step forward.

Are these kinds of saving possible? It may be that Google X, or Vannevar Technology Inc. defines construction cost to include social and environmental costs over the entire lifecycle, rather than how many in the industry typically view cost, in their particular segment.  The same Globes article states that the construction industry is  “ the largest consumer of global resources and raw materials - 50% - and global energy supplies - 48%. It also creates the largest amount of global solid waste - 40% - and is responsible for 50% of greenhouse gas emissions. It is the world's most wasteful industry and the main contributor to the deterioration of the global environment.” We could debate the exact statistics but the bottom line is, without a doubt, there is room for improvement in many areas of the industry.

No one, save those inside Google X’s secret circle, really knows how viable the new platform is or when it would be available, but it is often this out of the box thinking that leads to revolutionary innovation.  Who knew Apple would redefine the music business?  Consider that just one process of construction project management, planning and scheduling, hasn’t changed significantly since the introduction of the CPM in 1961- using paper until roughly 1983 when the PC became a common tool.  And, consider that productivity in construction has slowly but steadily declined  over the past 50 years, while every other industry has made gains; again, more room for improvement.  With margins compressing and projects becoming ever more complex, the construction industry is beginning to see the value of change on their bottom line.  Digital  technology is setting the new standard.   Those who don’t change will follow the historic productivity trend into further decline.  Change is required to improve the industry and its impact on the globe.  The sooner the change is made, the sooner we will benefit from improved outcomes.  Its time more people challenged the status quo. 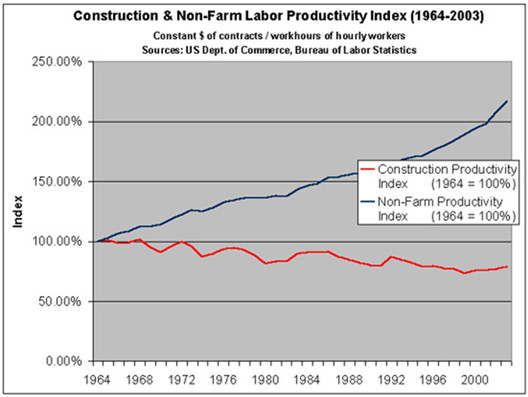