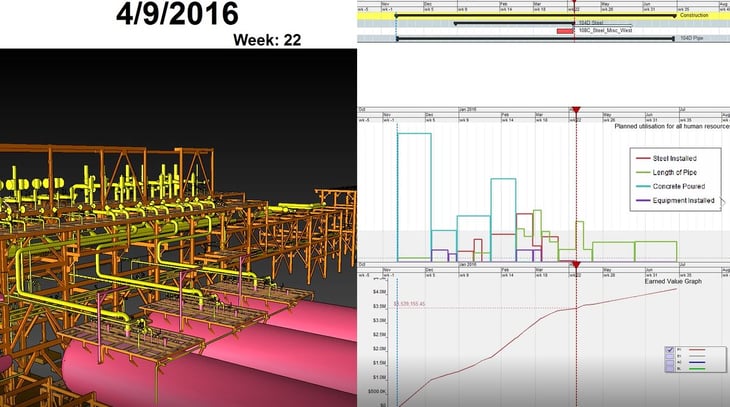 This post illustrates how Synchro PRO can be used as resource and expenditure management tool for project planning and controls throughout the life-cycle of a project- all in one single digital interface. Valuable cost and resource usage data such as Earned value Graphs and Planned Utilization Histograms can be generated and communicated easily with the Project Team.

The video of an Oil, Gas and Chemicals project (posted below) also demonstrates how schedule, cost, and resources can be validated and optimized using the animations and simulations generated in Synchro.

A progress tracking metric that can be quickly generated in Synchro is Earned Value. The first step is to create new Human Resources for each crew working on the project. In this example, we created four Human Resources for Concrete Poured, Equipment Installed, Length of Pipe, and Steel Installed. The next step was to assign daily costs to each of these crews and then assign these human resources to the task they would be working on.

This condition checks for the existence of the 3D object user field “Dry Weight” that is assigned to the task.

If the user field “Dry Weight” exists, then each of the dry weights for the 3D objects assigned to the task are added to find the total amount of steel corresponding to that activity. The sum is then divided by 1000 to convert from kg to metric tons.

The next step was to assign the planned units to a task as planned work using the Synchro Script:

This script sets the resource property “Planned Units” to the number of units calculated in the above user field.

Now, after simply creating a user field and running a script, the task is linked to resource quantity information.

In the video at the end of this post, the original schedule was baselined and changes were made to this baselined schedule. In this example, the relationships of tasks on the critical path were changed to shorten the project duration. The affect this change had on the project’s cash flow can be visualized in the Earned Value graph for use in the decision-making process after analyzing changes in the project schedule.

Below are links to two videos of the processes described applied to a project in the Oil, Gas & Chemicals sector:

Hector Arias Hector is a VDC intern on the Synchro Project Delivery Team based in Berkeley, CA USA