“Science fiction…earns its special place by opening a gap between what we can do today and what we might do tomorrow. It bridges that gap with a magical span that requires no buttressing and no load calculations, only conceivability.”[1] 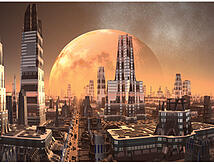 For the younger generation who has grown up with computers their whole lives, it’s hard to imagine the “ancient” B.C. era (Before Computers). The personal computer, which entered the market a little over three decades ago, in the 1980s, revolutionized everyday life and the way the world does business.  It even revolutionized the construction industry.

Prior to the 1980s (AutoCAD was first released in 1982) construction documents were all drawn by hand.  The first 3D architectural design software, including Archicad and CATIA, began to be developed in the 80s.[2] The first version of Revit wasn’t released until 2000.[3]  Then came 4D modeling – linking a 3D model to a schedule to view the construction sequence – Synchro entered the market in 2007.

We have gone from 2D hand-drafted drawings to 2D Computer Aided Drafting (CAD) to parametric 3D Building Information Models (BIM) to 4D Construction Sequencing in a mere thirty years. This technological evolution has enabled us to build bigger, taller, and more complicated structures, and to build them faster, more efficiently and for less money, with less waste and rework.

Engineering News Record recently published the impressive results of a construction science fiction contest.  The applicants were asked to imagine the future of the construction industry, and they did so with insightful, inspiring, and sometimes frightening results. In my personal favorite, titled “Canopy,” the main character is riding a very tall elevator. Sunlight begins to filter in as they near the top, and then the elevator emerges into a lush paradise, a paradise enabled by construction.

For the past 30 years the construction industry has been riding an elevator enabled by CAD, BIM, and 4D technologies.  These technologies have helped us to build bigger, better, smarter structures; and all this has happened in a short 30 years.  Many of these technologies, and the structures we can build as a result of them, may have seemed like science fiction 50 years ago, but the future is now.  Imagine where we’ll be in another 30 years. The sky’s the limit. What kind of paradise will your elevator bring you to?