For those who new to the concept: 4D is the inclusion of the schedule into the BIM to create a virtual construction process. As the 4D trend is catching on there is a need to evaluate the different kinds of 4D tools. The different tools for 4D allow for different optimization levels of the schedule and different kinds of output from the various software. As a part of my master’s thesis, I did a qualitative comparison of a 4D visualization tool, and a 4D scheduling tool. The tools were applied to a project, Gullfaks. Gullfaks is a 17800 m2 office building currently under construction outside of Stavanger, Norway. The contractor is Kruse Smith AS, whom I teamed up with for the comparison. 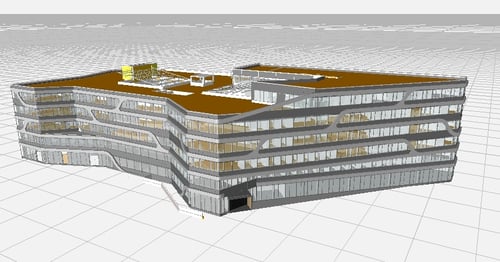 Firstly, it is necessary to define the difference between a 4D visualization and a 4D scheduling tool. Simply put:

-          A 4D visualization tool lets you visualize the construction processes as planned from a separate schedule. From this, you can evaluate if the project is constructible as planned. This approach is a more manual process.

-          A 4D scheduling tool allows you to visualize the project as planned, and then lets you change the tasks and dependencies to efficiently optimize and validate the sequence of activities inside the program.

The tool I used was Autodesk Navisworks’ TimeLiner. One of the nice features here was the “auto-attach by rules”, and the possibility of creating search-sets. This allowed for a quick sorting of the objects in the program. Since the searches were based on the properties of the objects it would need a sorting property existing in the objects from the BIM to create groupings based on zones, e.g. CurtainWall_level5_zone3.

But when the groupings had been created, the static nature of the program made it difficult to alter groupings within the program. The optimization became a cyclic process moving between the scheduling software and navisworks Timeliner to make updates. 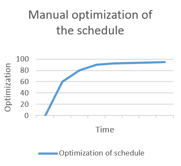 Although limited, this visualization approach can be used to improve communication and clarify the schedule, and also spot major to intermediate flaws in the plan, depending on the experience of the personnel reviewing the file. Minor flaws can have huge consequences, but they are harder to spot through visualization.

Synchro Software offers a 4D scheduling and planning tool, Synchro PRO. It allows for a more efficient approach to the optimization process since most of the changes can be done inside the program. A neat feature in the program is that the model shown is by default in review mode. Meaning, if you link an object to an installation task that hasn’t started the object will disappear from view and reappear when the you move the focus time to/after execution. Another trait that made Synchro more user friendly was the possibility to alter the appearance of tasks. So if you’re communicating the plan to multiple teams they can know which color is “theirs” and thus easier grasp the flow of work when there are multiple tasks going on at the same time. You could also include human, equipment, and location resources.

There is a clear difference in capabilities of the programs, with 4D scheduling having the greatest potential as a planning tool. However it is evident that both programs made the schedule a lot easier to convey and understand for the stakeholders in the project than a traditional 2D-Gantt-chart. And even the 4D visualization would obtain indirect time and cost benefits through improved communication. The 4D scheduler’s benefits are both indirect and direct.

The benefits of improved communication are graspable, but not necessarily measurable, and might therefore be a hard selling point. But the benefits of manually and automatically checking to see if there is something wrong with the schedule is measurable. That’s the cost of the avoided change order or time delay. Also, the ability to increase efficiency through just-in-time deliveries of materials and equipment. These are direct benefits from the 4D scheduler, and can be achieved through (1) dynamic clash testing of the temporary objects, permanent objects, work zones, and other objects on the site, and (2) generating lists where the activities, start, and finish dates are linked to objects and their GUIDs to enable just-in-time deliveries.

But for all of this to work smoothly there needs to be an easy way to sort objects in the software. Sorting the objects is a time-consuming, but important task when creating a 4D representation of the building. It is therefore important to make this process intuitive and easy. Navisworks was static and rigid with its groupings, and didn’t allow for much tinkering inside the program. Synchro had more fluid groupings, and there were a couple of ways to go about creating them, but most of them weren’t intuitive or straight forward to generate.